Until recently, black moor goldfish were always black. Now other colors and variations have become available. 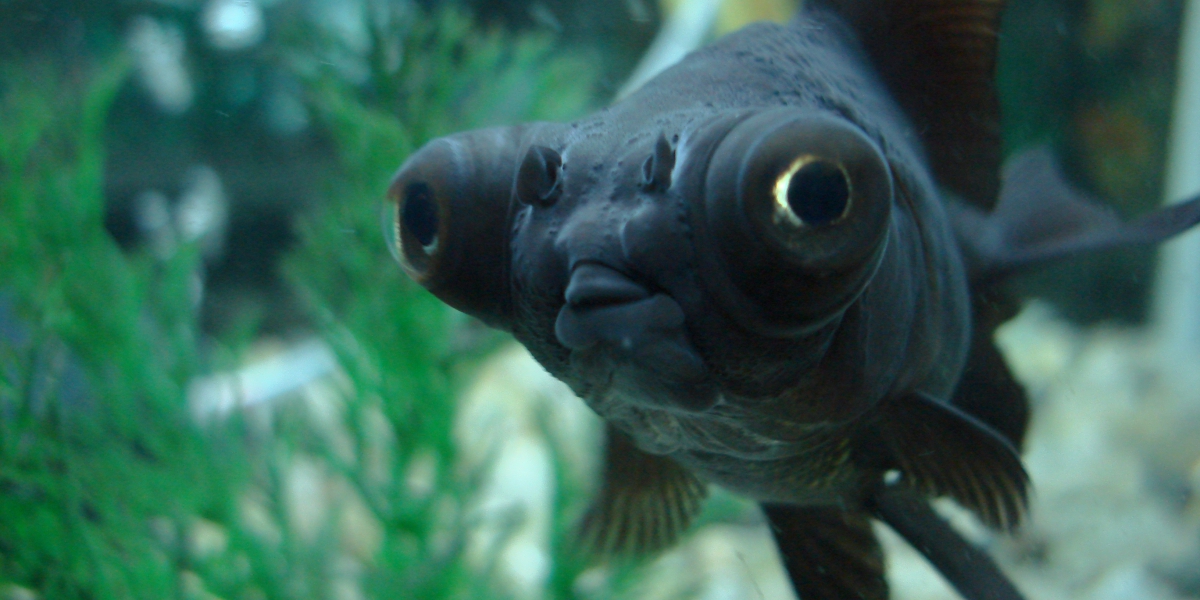 While some strains have a normal eye, others have a more unusual feature that has developed; a telescopic eye that protrude from the head. The telescoped eye variety of this fancy goldfish are referred to by several different names, such as;

Projecting eyes aside, black moor gold fish have long flowing fins, and deep bodies. Their tail is considered veiltail, and there scales are metalic with a velvet like appearance. That velvety appearance can fade if the black moor reaches old age.

The younger moors tend to resemble bronze fantail goldfish. The black coloration and the telescope eye develop over time, with age. Black Moors can grow quite large when given the right environment, and over time can also revert to a metalic orange color if held in a high water temperaure aquarium.

While Black Moor Goldfish with a deep solid black color can be hard to find many other colos have become available.

This is an egg scatterer during the summer

As the Black Moor Goldfish has poor vision they are not generally suited for an outdoor pond. An aquarium, without any sharp or pointed decorations, is much more suited for the Black Moors delicate eyes. Black Moor gold fish also have a sensitivity to prolonged exposure to low tempuratures.

Being very social animals, goldfish typically thrive in a community, howvere Black more goldfish can not see very well and may have a tough time finding food around the much quicker, better seeing gold fish varieties.

When it comes to feeding time, a black moor is just like any other goldfish - a pig! He eats almost anything and everything thats easily available on the market - pellets (sinking prefered), flakes, frozen foods like daphnia, shrimp, bloodworms, pre-cooked cocktail shrimp, freeze dried foods, fresh veggies like lettuce, cucumber, peas.....

And again, because of his eye shape, he will have a harder time finding certain foods, especially the ones that tend to float around in the tank a while before they settle down - flakes and the frozen foods. He needs some extra time with those, and surely appreciates it if some faster oranda does not take away his dinner!